Throughout the lecture series in both Research Methods and Horizon Scanning modules, there has been an emphasis on research within practice. Coming from an architecture education background, it is not a new concept, but the design process is considered somewhat differently. I suppose that is something to do with the size of the product created. Once a building is built, it cannot be redesigned and changed as easily. For smaller design, full prototyping is much more possible and this feeds into the design as a full research method.

When considering the design process, there are number of models. 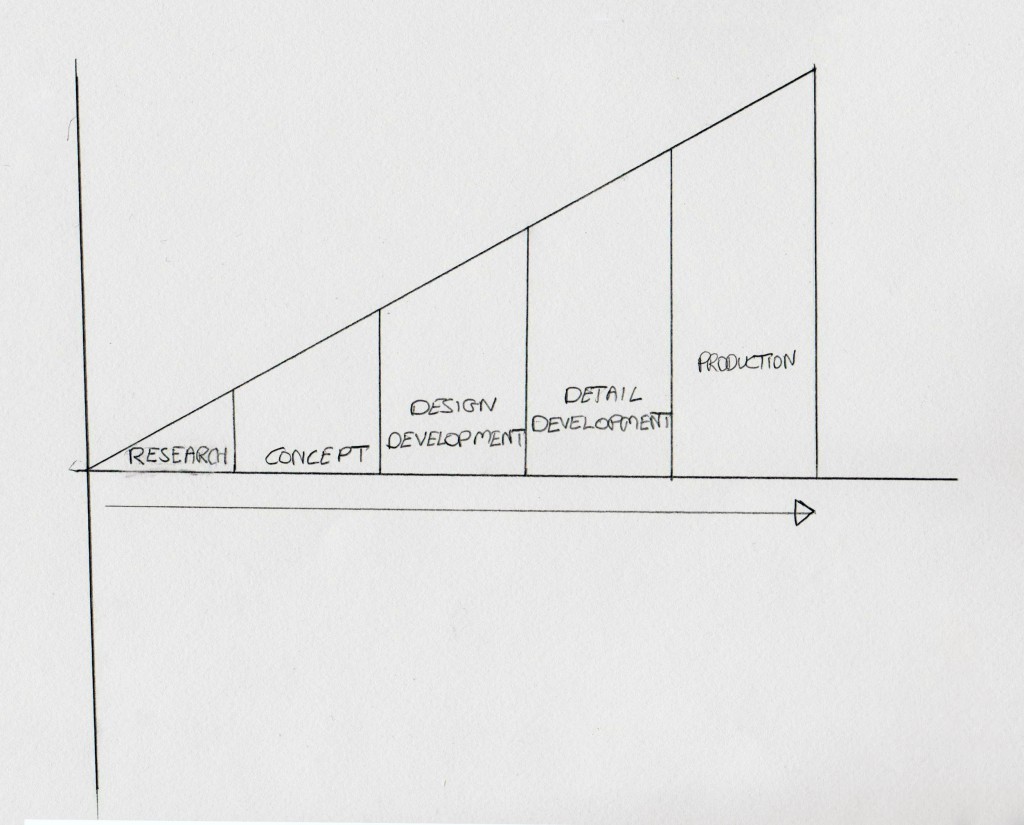 The standard model suggest it is a linear scale and that everything happens in order. In an ideal world, this might work but in reality it does not work out this way, or products generated in this fashion are usually poorly suited to the user and market.

The user-centred approach aims to focus on delivering something the user wants or needs. As such research reflects the users opinions as the design process goes along, and adjusts for them. It is iterative, where the cycle goes round several times, maybe more, before the final product is produced.  Why is this beneficial? Because ultimately, the user is going to be the one with the product, and if it does not work the way they would use it, it is useless. As a designer you can never be expected to think of all possibilities so involving user opinion and testing alleviates this. Beyond this, it is a measure of research that informs each next prototype or product.

A lot of the work in each of the modules has so far emphasised the connection between research and design. For example, the user centered approach revolves around integrating research into the design process. The research, observation and testing is all what influences the designs produced. If research says that a certain element is not working because it does not work in some way, then that element is changed in design.

The book ‘Doing research in design’ by Christopher Crouch and Jane Pearce which I read, is useful at emphasising some of these points and makes for useful reading as a designer, that helps us link theory with application in design.

They talk of the ‘wicked problem’ in design which they define as;

‘problems that are so complex that they have no single solution, are in fact never solvable, and require continued research in order to kept within our understanding’

Most things we design in the built world, lie somewhere between an ‘easy’ problem and the ‘wicked problem’. The wicked problem could be described by where in trying to solve it, many other issues are developed that are not foreseen. Therefore we must do much research to realise the implications of our designs.

They summarise that nicely:

‘The solution and the problem are thus obviously intertwined, and without some kind of initial scoping of the consequences of a design decision, the success of the design is likely to be only partial’

The need to research and reflect on your research

The authors set up explanations well, as to why it is important to be speculative and be reflective when designing.

To me this is a really interesting quote, but what it indicates to me is, when researching, you have to question yourself and your research and not get tied down to each part as fact, especially as a lot of research is subjective and therefore must be taken into consideration as part of the wider perspective. We can get ideas from these elements, be creative, but must also reflect on those decisions well, be it through more research methods or otherwise.

‘if the individual can acknowledge his or her subjectivity and realise that personal approaches to a problem can both frame the problem imperfectly and provide interesting insight, then that is a useful default position’

This frames what I think we are meant to achieve from the theory of research methods, we must be reflective with our designing and not approach from a single viewpoint. We must question ourselves and why we are doing each thing along the process.

Just collecting and research is not enough. We must make the connections and leaps between the research we have.

‘Asking questions is fundamental to both researcher and the designer’

‘we suggest that the question is an important tool in fashioning an understanding of what the problem is. By asking questions we can evaluate how problems sit in havitus/field relationships.’

‘The solution to a problem emerges during the reflexive process of its resolution, and information gathering and ordering are not enough by themselves to provide solutions’

Abductive thinking is their explanation as to the way we make these leaps from the information we have:

I think it is interesting how they word this concept, but it makes sense that it is only when we thing carefully and reflectively about the information we have, can we make the connections necessary to generate a new idea or concept or way of going about things.